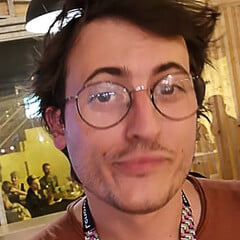 Riccardo Massironi is a Stage designer and concept designer with working experiences for Opera and classic ballet, events and video games.

After graduation in Scenography at the Accademia di Belle Arti di Brera in Milan, he had a Masters’ Degree in Advanced Digital Art from ImasterArt in Milan.
During his university years, he has participated in numerous events, starting a collaboration with an Event design studio based in Milan(2012-2015); at the same time, he cultivated a passion for the graphics computer by applying it to the design of the theatre and scenic shows.

2012 also comes its first contact with the video game industry with an Indian collaboration for an independent video game. He later works for the Czech Republic, USA, Canada and Italy, mostly on Indie projects.

since 2013 he started collaborating with the set designer Ezio Frigerio on various Opera and ballet, working in Spain (Madrid, Barcelona), China (Beijing), Kazakhstan (Astana) and Italy (Naples); nowadays he is still co-working with Frigerio travelling around the world

In 2014, he has the opportunity to follow as an Art Director the scenic realization of a short film in Los Angeles: he takes care of the original concept and assists set designer Giels Masters on the set and on locations.
In 2016/17 he has been teaching at ImasterArt as a concept design teacher.
In 2018 he signs set for Astana Opera performing the ballet: Sound of time and contribute to the video credit for the Gala Ballet for Bolshoi Theater.